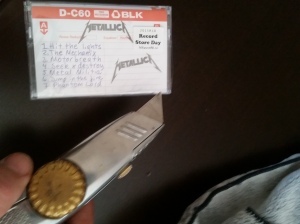 On Record Store Day 2015, I along with thousands of other buyers did the unthinkable. We bought cassettes in 2015!! The very select few like myself have always bought cassettes, but many may have bought their first cassette, or their first cassette in decades. The reason for this of course was Metallica was re-releasing the No Life ‘Til Leather demo for the first time since 1982. Many people have never heard these early recordings, especially on this rare early demo, so the temptation was too great. The release was actually the best selling item on this day. Who knew. A cassette could be a huge hit on the day devoted to records. I searched on Discogs for this release, and copies are going for ridiculous money. I spent a few seconds debating about whether to save it in the sealed condition. But music is meant to be played and heard.

The cassette itself is great early Metallica. Ron McGovney plays bass on this demo, and he does a great job(He quit the band shortly after, to be replaced by Cliff Burton). James Hetfield’s voice sounds more melodic, with much less growl, and hardly any ‘yeah’. The first 3 songs, Hit The Lights, The Mechanix, and Motorbreath sound like they could be on a 70’s hard rock band album, rather than a thrash metal album. Then Seek x Destroy kicks in and from there on, the final 4 songs are thrash mixed with NWOBHM-like sounds blasting from the speakers.

Hit the lights – Drum solo to begin with, combining with wailing guitars. The singing is very articulate and crisp. If the uninformed did not know this was Metallica, they would never guess this was James Hetfield.

The Mechanix – More drums and guitars to start the song off. Then Rob Halford circa 1974 kicks in with the vocals. Wait. The cover says this is Metallica, so it has to be Hetfield. It can`t be. The vocals are crisp and into the higher notes. No growling at all. Great guitar work. The song has a 70`s hard rock/metal feel to it.

Motorbreath – The song sounds to me like what might have became if Rush and Judas Priest had worked on a song together in 1975. It has bit of the prog, mixed with a lot of early metal goodness. All rolled up into a non stop pounding drum beat, and guitar wail.

Seek x destroy- Any Metallica fan knows this song. James is starting to sound a little more like his later self, but he is still in a little higher range. The guitar in this song is a little more subdued than on Kill Em All.

Metal Militia – I never noticed before, but the start of (You Gotta)Fight for your Right ( To Party!) sounds like it sampled the guitar riff that starts this song. That is where the similarities end though. Metallica’s version of a party is an all out metal guitar assault. I still hear the Rob Halford influence, but I do detect the slightest growl added on for good effect. It is a nice contrast between high pitched screaming and deeper snarls. Ever present drumming and speed riffing hold this song together. There is even a groovy deep down bass groove half way through the song that lets people know who Ron McGovney was, and that he wasn’t leaving the band until he made his mark.

Jump in the fire – The bass seems to be a little louder on this song. It may have taken Ron a while to warm up, or perhaps he was told how to play, and had no control over the first 4 songs. The drumming and guitar work are great. Dave Mustaine even has a little riff that almost has a blues flavour to it. It doesn’t last for more than a second though. This is metal after all. Or is it? The song also has a little 70’s hard rock feel, but the metal definitely takes over. James is mainly James, with a little you know who mixed in for good measure.

Phantom Lord – The guitar work has a bit of an Ace of Spades-like sound to it, but yet seems original. The drum work as usual on this demo is frenetic and non-stop. I would suggest all of the Lars haters to listen to his early work on this release. Dave Mustaine does a sweet job of driving the strings into the upper echelon of mandatory metal guitar work. Some more Halford like wails, and a bit of a scream end the song.

Overall I would rate this release as an absolute must have. Casual Metallica fans will note the difference between this and all of the following releases by the band. Metallica die-hards will enjoy this as well. Even if they already own an original copy of this demo, and the Kill Em All album in which these songs eventually end up, the production quality on this release is night and day better than either of those releases.

I would rate this release as a 9.5/10 and suggest for anyone that is interested to buy it, and listen to it. Don’t store it on a shelf collecting dust.

For those of you that would be on the fence because you don’t even own a cassette player, fear not, I will be doing some more articles about cassettes, cassette players, what to look for, and how to look after them. I have you covered, and even if only one of you decide to take the cassette plunge, I’ll be a happy man.