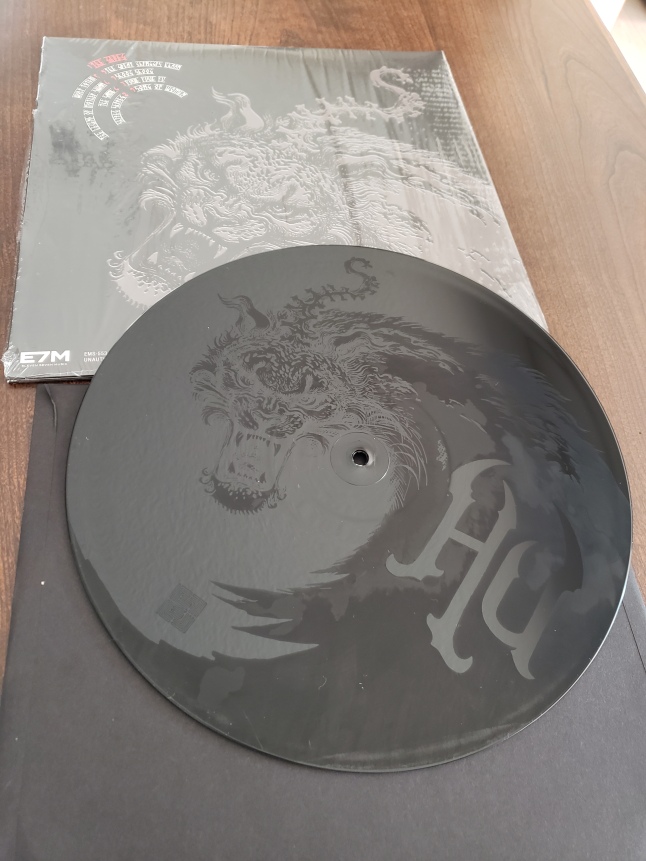 I heard an interesting conversation recently. “What band is playing tonight?” a passerby asked the bouncer. “The Hu” he responded. “WHATTTT??? THE WHO!!!!! NO WAY” she exclaimed. “Not that Who. It’s spelled H-U.”

The Hu isn’t trying to fool classic rock fans by having a similar name to the great British band. The band name is a Mongolian root word for human being. Everything about this band reeks of tradition. If not from the 1960’s classic rock roots then perhaps the 1260’s Mongol Empire. Traditional Mongolian instruments such as Morin Khuur (horsehead fiddle), Tovshuur (Mongolian guitar), Tumur Khuur (jaw harp) are mixed with guttural throat singing to form the majority of the music. The band however throws in more modern instruments such as bass and drums to kick it up a notch. They call their music “Hunnu Rock(s)” (Hopefully they stay as far away as they can from Vince Neil).

I am borrowing the following track by track guide(in quotes) for this album from an article in Louder. My comments follow the quotes.

The Gereg – “The Gereg was the first diplomatic passport introduced to the world, by our ancestors. In the 13th century a person who had the Gereg could travel through many countries without any harm and restrictions. We named our album The Gereg so that we can travel to every country in the world freely and share our music with everyone. Our album is our passport to the world.” The pounding drums that begin this one off let you know this will not be another traditional music album. Right away the vocals remind me of Du Hast by Rammstein. The German language can sometimes be perceived by English speaking folks as sounding angry or aggressive even when it is not meant to be that way. That theme continues  throughout much of this album. I don’t understand a word of what they’re saying, but I love it. Thankfully the band was allowed to obtain a Gereg and share their music with us.

Wolf Totem – “We believe that everyone has a warrior in them. Through Wolf Totem we wanted to wake up those inner warrior in each of us so that you can face your fears and overcome them. This song is about facing and accepting the adversaries and coming out as a winner.” The mix of traditional fiddle sounds, the unique guitar tone, the booming bass and pounding drums mix with gutteral noises and driving chants to make an absolute killer of a song. So good!!!!

The Great Chinggis Khan – “We wanted to tell the world our side of the story. He brought to the world so many good things such as postal service, diplomatic passport, international trading and etc. It was filmed at Burkhan Khalduun, the birthplace of Chinggis Khaan, in February of this year in minus 30°C degree weather. The cinematic video shares the story of Chinggis Khaan as he is portrayed in Mongolian culture as an inventor and a founding father of the country rather than the worldly view of him as a warrior and conqueror.” The vocals on this one have an almost angry, forboding tone that do seem to actually be more warrior like than postal service like though.

The Legend of Mother Swan – “This is a tale of the power of a mother’s love for their offspring. In Mongolian culture we deeply respect our mothers because they are the reason we’re here on earth. This song tells a story how a mother swan protects and saves her babies by sacrificing her own life. We felt like this message should be shared with everyone in this modern world.” The vocal harmonies are beautiful and the pounding drums pound.

Shoog Shoog – “Shoog shoog is the calling of the Tengri [Mongol gods], when the shamans connect to ancestral spirits. This song is praising our sacred landmarks and offering our fate and bounty to the hands of the Tengri. With the upbeat tempo we’d like to inspire our listeners to get energised.” This one begins off with a chant not unlike if you substitute the “oi” in TNT with “shoog”.  Any song that reminds me of AC/DC is ace in my book. The vocal sort of morph off into an almost Rob Halford like sound. AC/DC, Judas Priest with a little Rammstein.  Sign me up. I can only imagine that the Tengri would be very pleased with this wonderful sounding song.

The Same – “The lyrics of the song came from a poem written by Tsogt Taij, which was carved on a rock known as “Tsogtyn Khadnii Bichig” (Rock Inscription of Tsogt The Prince) in 1624. The message of the song is that the truth is the same everywhere. You could be the king in heaven or a king on earth but your judgement on good and evil is still the same.” Sabbath-like scary howling wind noises begin this one off. The jaw harp sounds (which originated from the lower class) would place this song in the popular Mongolian hillbilly heavy metal genre that is thrown about all too often these days.

Yuve Yuve Yu – “This song is about respecting our elders and protecting nature. We are asking our generation: ‘why are we like this?’. We travelled over five thousand kilometres in 14 days to Western Mongolia off roads to make the music video. There were times we were freezing on top of a high mountains or sweating in the desert. We wanted to show the world the beautiful nature of Mongolia.” Tapping my feet while chanting “yuve yuve yu…” over and over. A really fun song.

Shireg Shireg – “This is a farewell song for the warriors from their parents. Back in the days when Mongol warriors went to war, their parents would share their wisdom with them and wish for a safe return. When you listen to the song, you’ll hear in the distance the sound of a horse trotting, as the soldiers used to leave their homes for war with their horses. This particular song contains the message about a warrior with a Gereg who travels the world and delivers the words of the Great Khaan to all.” I hope the parents of these incredible lads inspired them to write this song. The use of wood winds set this song apart.

The Song Of Women – “In our culture, respecting women is one of the most important things. They should be respected and loved everywhere in the world. Every woman is beautiful in her own way. We wanted to praise the women through this song and encourage them to be free and to pursue their dreams.” Wonderful words indeed. This is a mellow album closer that inspires both in sound and meaning.

These guys seem like really cool dudes. Someday I would love to sit around a fire listening to them play some tunes, eating sea-buckthorns, drinking Arkhi out of some old wineskin and wondering how we’ll be able to snap a good photo of that snow leopard from the album cover(and beautiful 4th side etching). For now though I can put this album on numerous times while perhaps doing some research on Mongolia. On a side note, Howie Weinberg did an amazing job mastering this album. This pressing sounds beautiful. The production and sound quality are wonderful. Really well done for a band from wayyyy out in left field. If you like Rammstein, AC/DC, Rob Halford and tradition, you will love this album. If you don’t, you will love this album.