Today I am beginning an ongoing series under the heading of “Now for something completely different”. I will occasionally throw a curve ball out there. Just like this one.

My memory of the family name Osmond started at a young age. Growing up a child of the 70’s, and living in a religious family, the Osmonds cartoon show and Donny & Marie show was on our tv back in the day. These were shows I am sure a ton of kids watched but no one would dare admit it. The Osmonds were definitely not cool. Squeaky clean and straight laced. They almost seemed as if they were from an earlier time. Back then I hadn’t even heard of Utah or the Mormon religion, but since my tv time was limited, and I had to watch shows my parents approved of, Donny & Marie it was.

Musically though I quickly moved away from the sappy garbage the Osmond family had become famous for. They call it Puppy Love. More like Puppy Sh*t. 2 seconds into that song and I`m clicking the next button. I just assumed all of The Osmonds albums would be sappy,  early boy band garbage. Then late last year a dude I know from an Ontario metal band sent me a video by The Osmonds. Hah. Nice joke buddy. This should be good for a laugh. This was not good for a laugh though. It was just good. Great in fact. Right then and there I knew I had to search out this album, and even got a few more. I can admit it`s tough to find them in good shape. Almost as bad as The Monkees. I have only ever found one Monkees albumin decent shape. I think that bands that were owned by younger listeners tend to see more abuse.

Back in 1972, The Osmonds had already released 9 albums. The band had done whatever the studio had told them to do, and young brother Donny was already emerging as a teen sensation. The band told the studio they wanted to do a rock album in the vein of their heroes, The Beatles and Led Zeppelin. The studio balked and let the band know it would never work. Probably letting them know it would go over like a lead zeppelin or something like that. I`m really glad for short time frame the band went in this direction, and that I was informed of what I was missing.

Hold Her Tight – The Mormon religion believes in chastity before marriage so maybe not too tight. Any song that begins with a Jimmy Page-esque riff, some sweet talk boxing, and a cool horn section is ok in my books.

Utah – The Beach Boys had California Girls as their tribute to their home state. The Osmonds have this song. It`s a clap happy, toe tapper that has elements of 70`s jazz, 50`s rockabilly and the best of Nashville. Weird mix, I know, but it works.

Girl – if you listed to a Leon Redbone LP at 45rpm and his voice went way  up in pitch, this would be the result.

What Could It Be – This song could have fit onto The White Album or SGT. Pepper`s and no one would have complained.

We All Fall Down – Donny was mostly cut out of this album due to his teenage voice changing, and the different direction of the band. He shows off some pretty trippy keyboard work here though.

And You Love Me – One of those mellow, 70`s Sunday morning songs to chill out, enjoy the sunlight and watch the grass grow. The song even has frogs chirping at the end to complete the image.

Time to flip the black PVC over.

Crazy Horses – This is the song that got me to rush to Discogs. Speaking of Rush, Merrill Osmond, the brother who sings the higher pitched vocals reminds me a lot of Geddy Lee. The band already had a huge female following so it wouldn`t have affected them. Donny does a wicked impression of a horse neighing with his keys. In my opinion, it is the best thing Donny ever did for the music industry. This song is not sh*t. It is THE SH*T!!! The song was banned in many countries throughout the world because censors thought it was about drug use, but it was a warning about the automotive industry polluting the atmosphere. They were not only talented rockers, they were way ahead of the curve environmentalists.  Imagine the censors trying to tell the radio industry that The Osmonds were being banned. Perhaps for Coke use. Classic Coke.

Life Is Hard Enough Without Goodbyes – Some wicked guitar work here, and Merrill`s wicked voice. The hair standing up on my arms and legs tell me all I need to know.

Hey Mr. Taxi – Perhaps Lenny Kravitz used this song for inspiration. It has more of a George Harrison guitar tone than Lenny`s ultra cool. The Osmonds were politely telling the speeding taxi driver to pull over rather than belittling a racist cab driver. No need for car horns to censor the evil curse words here.

That`s My Girl – We go back into the happy zone. The vocal harmonies, horns and string sections are really top notch.

Julie – It begins off in an almost-Little Richard like song then morphs into a doo wop number.

Obviously from the pictures on the album cover, these 5 brothers were wanting to change their image and show everyone they were ready to rock. 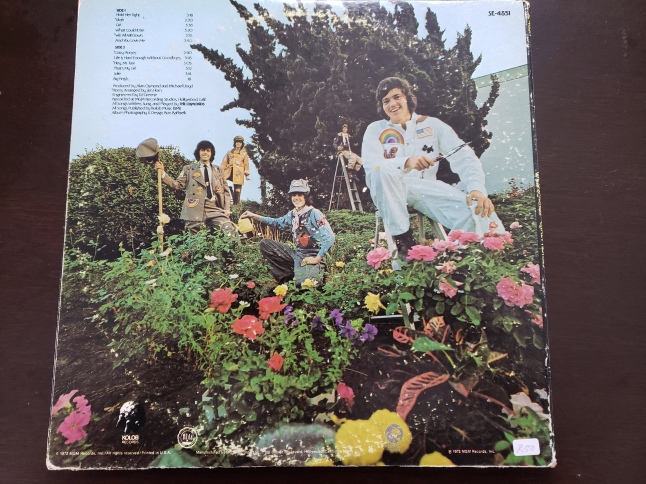 Pictures aside, this is pretty damn good album. It shocked me the first time I heard it. I say give it a spin and hear for yourself. Chuck Eddy ranked this album 66 (or no. 66.6) of The Five Hundred Best Heavy Metal Albums In The Universe. I wouldn`t go that far. It was sort of metal, especially for 1972, but it was definitely the closest any Osmond has ever come to being cool.